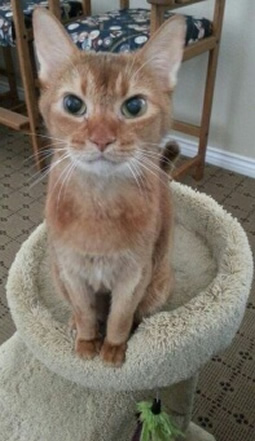 A word about Ian…

Ian came to us in March 2014 with his sister when their owner had to move.

They were ten years old and front declaw…..we were wondering how would we find a  home for them.

Well they found a wonderful home, but the rug was pulled out from under Ian in May 2015 when he became ill.  He was diagnosed with diabetes and his new human could not take care of him.

Lucky for Ian that his former foster parents loved him and said they would do everything possible to get him back on track.  Even luckier for S.C.A.R. that they agreed to permanently foster him.

It is not easy caring for a diabetic cat.  They  need to be on a special diet and go to the vet regularly for glucose curves.  Their insulin shots have to be given on a strict schedule so staying out late at a restaurant and dining is out of the question.

Ian purrs while being given his insulin shots and is a good patient.

UPDATE:  Ian’s diabetes is now under control and he is not on insulin, but he does have other medical challenges..

If you are wondering how the siblings are doing being split up, well Ian has more cats to play with now and his sister is happy being the only one.